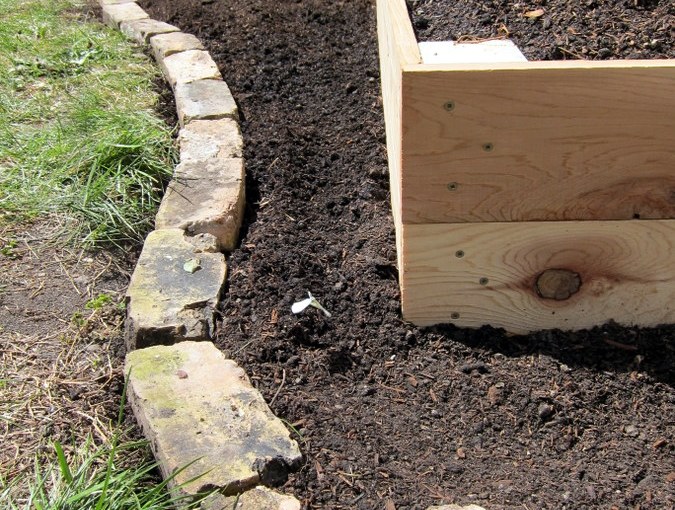 This past weekend was perfect weather for tackling our raised garden beds and I’m pleased to report that they came together really well.  A few splinters, minimal cussing, no regrets.

Our bed size was predetermined because of these existing garden plots: 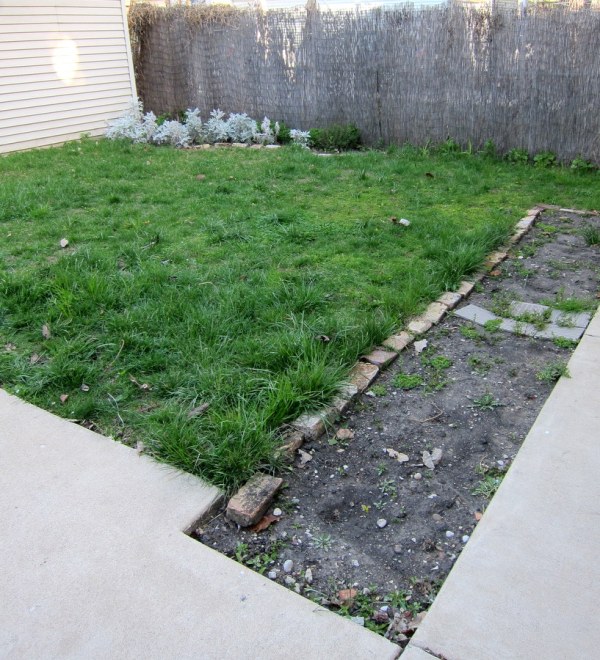 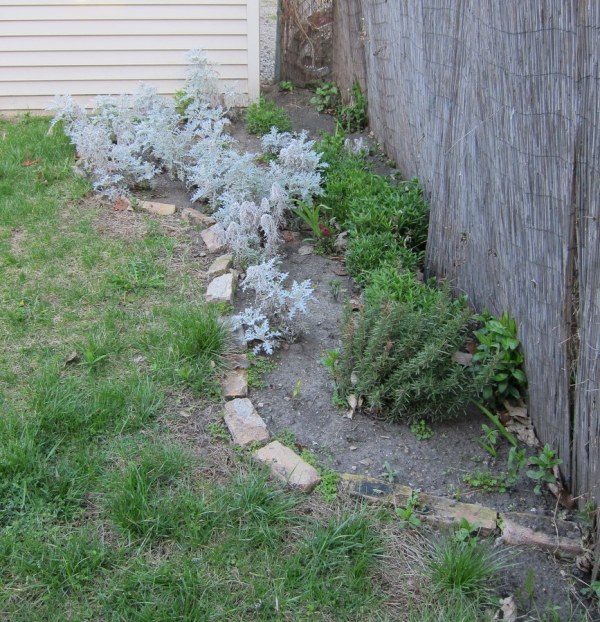 Pretty sad, right? We had mediocre success growing in them last year, likely due to crummy Chicago dirt. I wanted to start from scratch with known-to-be-good soil: hence the raised garden beds. I planned an 8′ x 20″ bed for the corner plot and a 12′ x 26″ bed for the middle plot.  I chose to build them using stacked 6″ boards instead of 12″ boards because they were cheaper and I could cut them with a miter saw.

As for wood choice: the Internet seemed to have reached a consensus on cedar as one of the best lumbers for raised beds. I purchased ours at Menards, after a friend (hi, Kei!) recommended I keep an eye out for their sales. 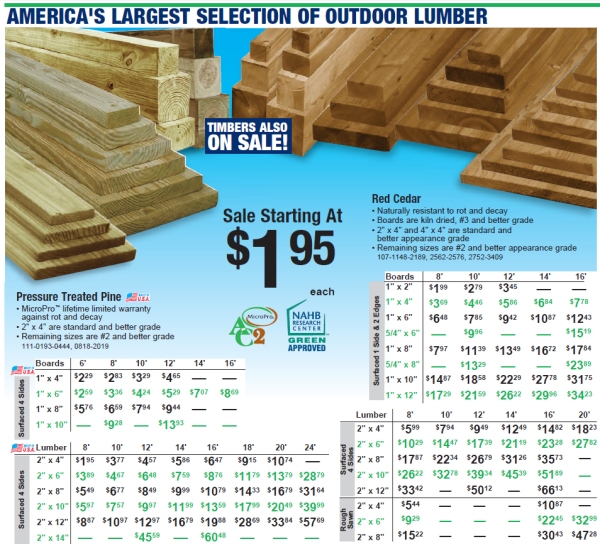 On the upside, Menards red cedar sale did save me a bit of money. On the downside, it meant I had to go to Menards. That place is the worst! I’ve just never had a positive customer service experience there. I don’t like that you have to purchase the wood before you see the product.  And, I don’t want to do my project shopping at a hardware store that also sells dog food, Totino’s pizza and men’s undershirts. Furthermore, I’ll confess that I may harbor resentment toward Menards because I was arrested at a Des Moines store in 1999 for protesting their use of wood harvested from endangered old growth forests. College, man.

One more note about the wood: upon learning that a cedar 4×4 would cost $29, I balked and went with an $11 pressure treated pine 4×4 instead. I know that previous versions of pressure treated pine raised alarm when used in garden beds, but MicroPro AC2 is seemingly safe for this purpose and is even certified green. Perhaps this certification process is similar to the one that allows Cheez-Its to claim they’re “made with real cheese,” but I decided to suppress my hippie past and take it at face value.  This is what a whole bunch of wood looks like tied semi-precariously to the top of a Subaru at night: 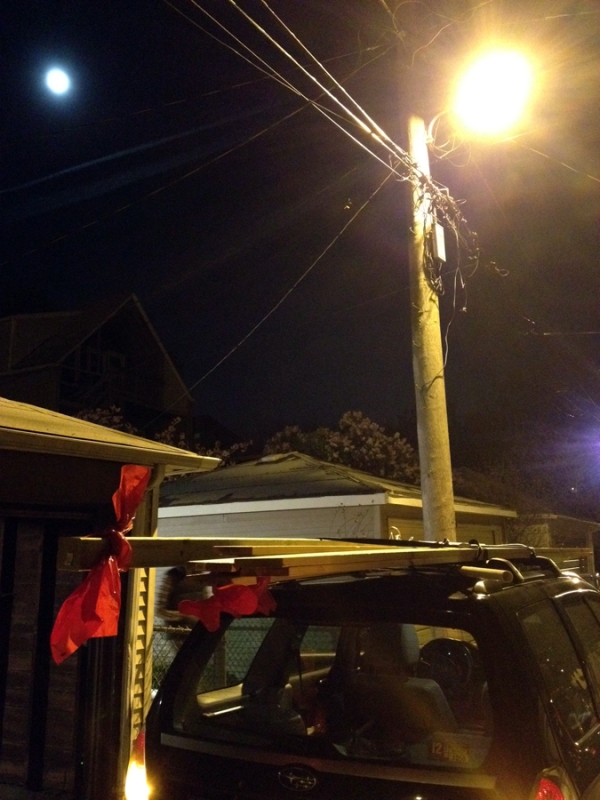 Starting early Saturday morning, I secured the saw to an old wood table with bolts and wing nuts and then made quick work of the 4×4:

Because installing them pre-dirt would be far easier than at any other time, I went ahead and made a few PVC sleeves that could be used for future modifications, such as hoops + tarps if I want to extend the growing season. I don’t know if I’ll actually do that, but saying things like “extend the growing season” makes me sound like a legit gardener.

Two of the sleeves in the back garden bed will be used immediately for a heavy-duty metal trellis, which I will detail in a future post once my trellis netting arrives in the mail. 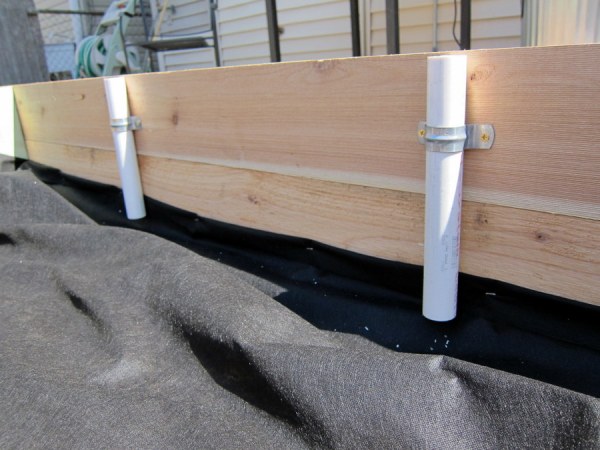 As for the dirt: I went with bulk soil instead of bagged because of cost and convenience, and I went with Evanston-based Buy the Yard because of a recommendation from Jarrod’s coworker.  Their “garden mix” (a “custom blend of topsoil, leaf compost and aged horse manure recommended for planting annuals, perennials or vegetables”) is $33 a cubic yard (cheap!) plus $81 for delivery to our Chicago neighborhood (steep! but acceptable).  I found their cubic yard calculator helpful and accurate. We needed about 1.4 yards for our beds. They don’t do half yards, so I rounded up to 2 yards so that we could replace a lot of the bad dirt in the areas not covered by the beds, where I plan to plant flowers.  This is what two cubic yards of soil looks like:

Note: we don’t own a wheelbarrow, so all of the soil – all two tons of it – was moved with this bucket.  It was not ergonomic.

Marti: “How do you feel about being on the internet in this outfit?”
Jarrod: “Happy!”  (Said in all sincerity.)

Good soil on the right, bad dirt on the left.

Bad dirt out, good soil in.  “What did you do with the bad dirt?” you might ask.  To which I would reply “Don’t worry about it.” 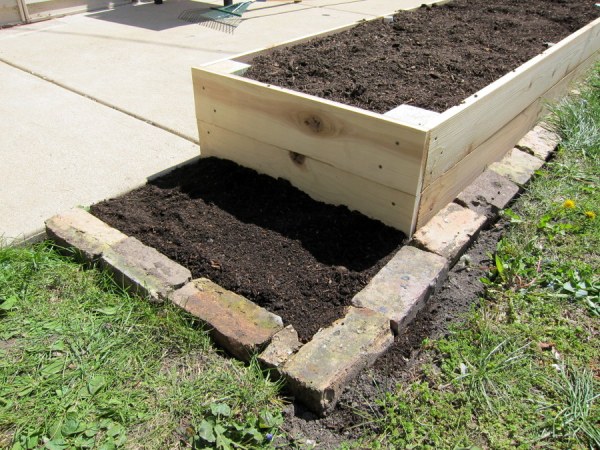 Not cheap by any means, but I hope they’ll see us through several years of bountiful harvests. And I’m not factoring in the cost of my new chop saw because that’s an investment, goddamnit.

Even just sitting there plant-less, looking like a weird graveyard, I think the boxes are a major improvement to the yard.  Victory!