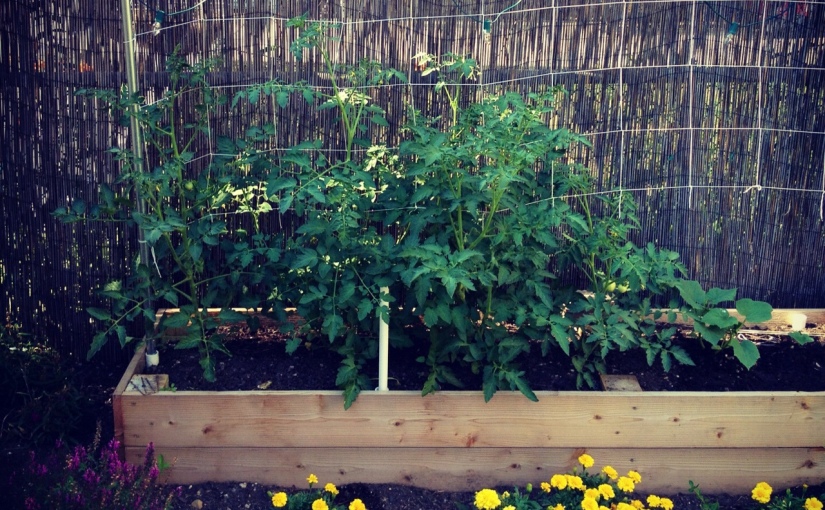 We’re back from vacationing in Alaska, where the only projects I accomplished were hiking all over the place and not getting eaten by a bear.  Among many other things, we explored a glacier cave, which was literally awesome and only slightly dangerous. 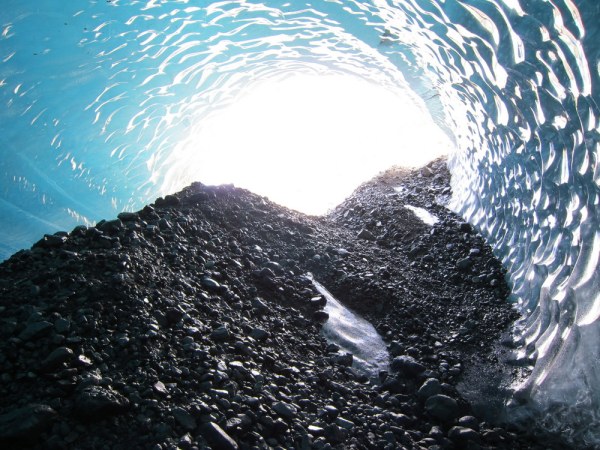 I’m very glad to have experienced it, but I was also thinking “If I die in an ice cave collapse, no one will be able to say ‘Well, at least Marti died doing what she loved.'”  I mean, really, killed while hiking? Wearing pants that covert into shorts?  That is not how I am supposed to go. Death by spray paint fumes, or a freak rug avalanche, or a pizza overdose: then you can say I died right.  So, let’s get back to it!

As briefly glimpsed and mentioned in the post about building our raised garden beds, I rigged up a heavy-duty trellis structure for our vining plants:

The net is loose and stretchy until you pull it taut and secure it.  I tied the loose ends and also used cord ties. 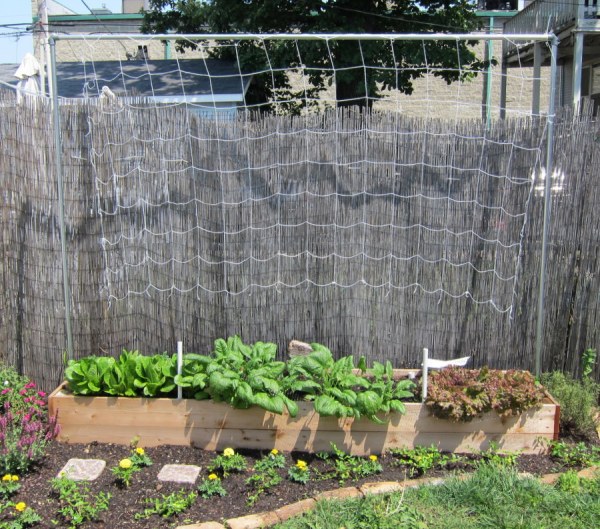 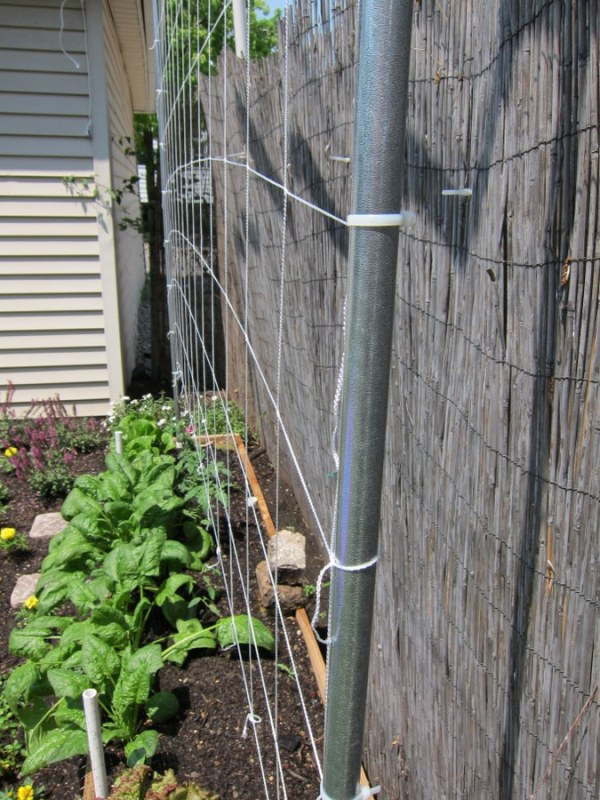 All-in-all cheaper than metal cages, much sturdier, easier to harvest and plenty tall for high-climbers like pole beans.  Now that our first wave of lettuce and spinach are gone, the tomatoes are putting the trellis to use.

Two other late-crop newcomers are the cucumber and French pole bean plants.  The latter isn’t coming out swinging, but I hope it perks up once its roots get stronger.

In other garden news, our broccoli was kind of a bust.  It looked hardy, but we got only a few small heads that immediately flowered.  So much space and nutrients consumed for so little food produced.

The lettuce has peaked but continues to keep us knee-deep in salads, and the kale crop has been amazing.  We harvest the outer leaves and the center keeps growing.  Mint, of course, is bountiful and irrepressible. 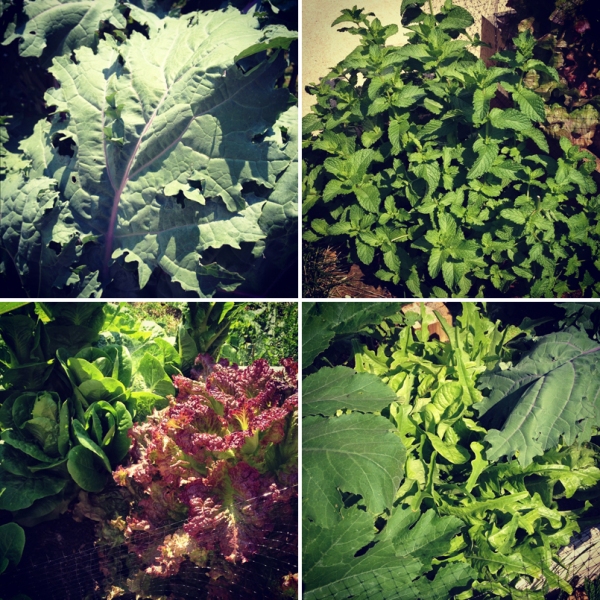 And, really, the best part of the garden is simply that it’s pretty.  Summer! 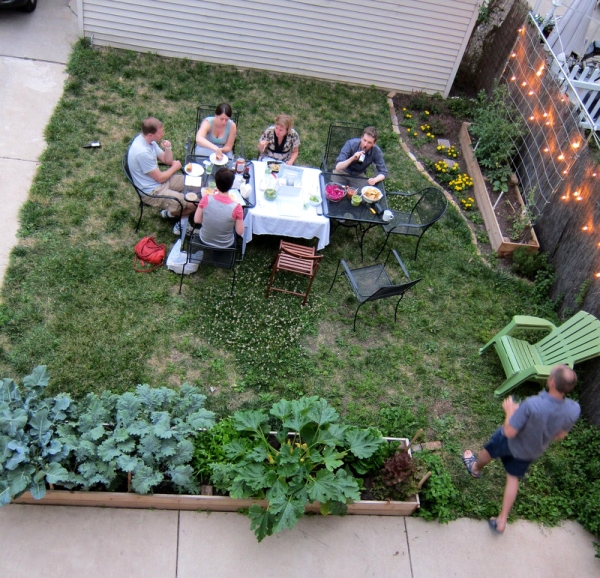 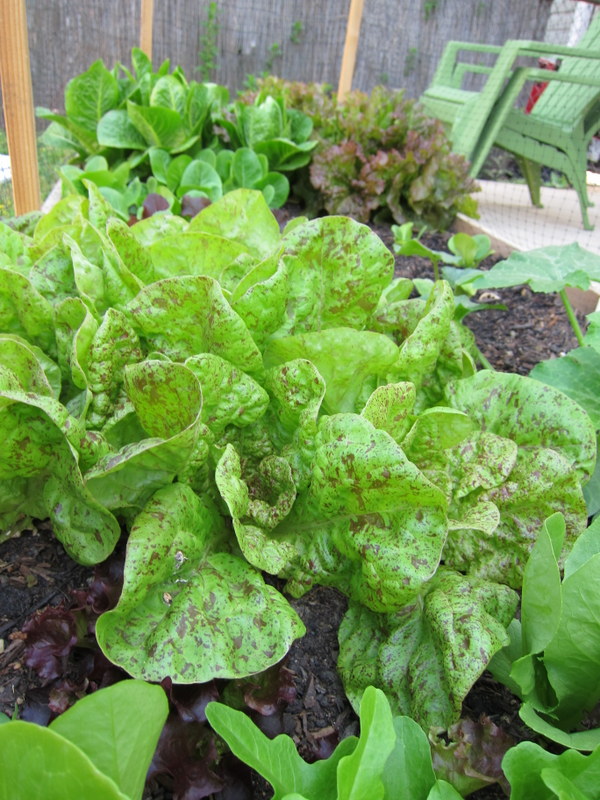 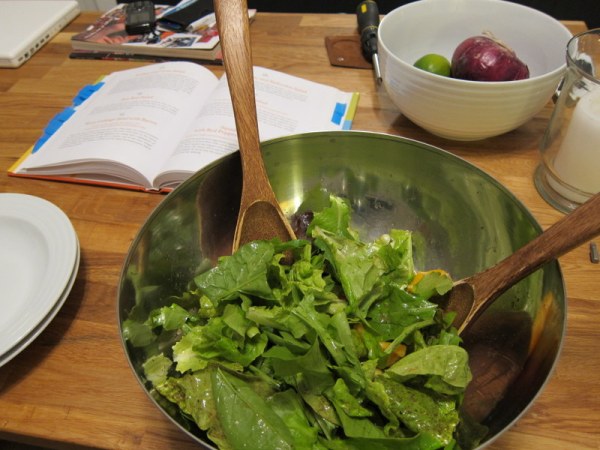 Recipe: Scallop and Citrus Salad from Mark Bittman’s Kitchen Express. With apologies to Mr. Bittman, here’s a picture of the recipe:

No fancy food photography available, so instead I’ll show you a picture of what dinner usually looks like around here: a laptop and some ill-gotten HBO GO (just kidding, Comcast!). The Veep title sequence is really bad, right? 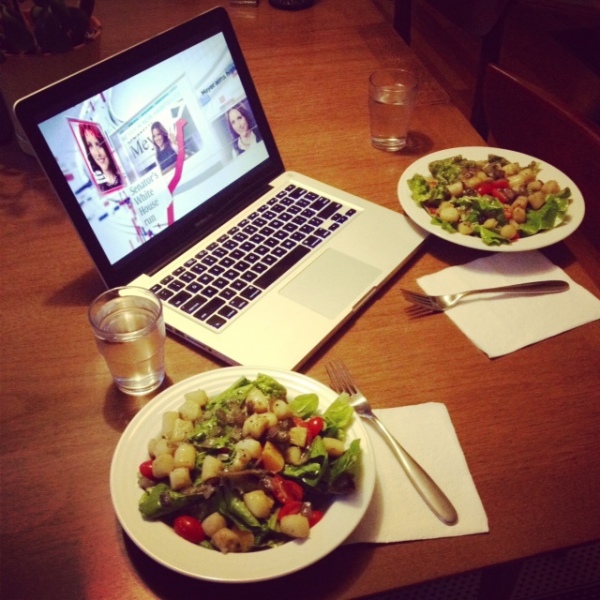 The garden consumption continues, although tonight we took a break from salads.

Produce: Spinach.  I should know by now that when it comes to cooked spinach, I never prepare enough.  I harvest a huge amount like this, thinking I’ve conquered the insufficient cooked spinach issue, and then it wilts down to a mound the size of a ping-pong ball and Jarrod feels denied his rightful amount of vegetables.  The pasta was still good, though.

Recipe: Orecchiette with Spinach and Gorgonzola Sauce from Cookie + Kate

Photo Copyright Will Cook for Friends 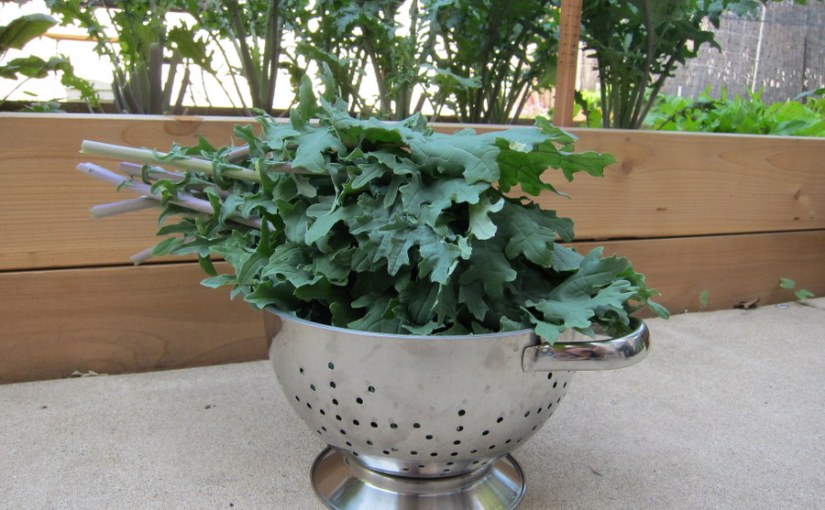 Get excited: it’s motherf’ing lettuce week.  Our garden has exploded within the last two weeks: the photo on the left was taken on May 13th, the one on the right on May 27th.

Now it’s time to start eating the bounty.  The lettuce/kale/spinach in particular needs to be consumed before it goes to seed.  So, I have meals planned for each weeknight this week using produce from our backyard and will post links to the recipes I used. 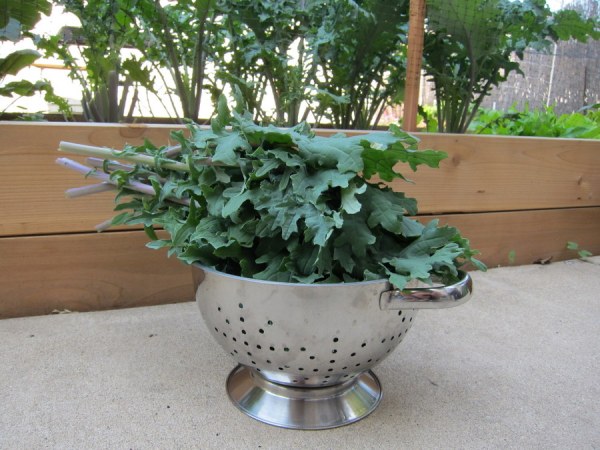 Recipe: Kale, Apple and Pancetta Salad from Once Upon a Chef

No photograph of mine would be as nice as the one from Once Upon a Chef.  This salad is delicious.  I’ve made it before for people who don’t usually like raw kale (Hi, Kateri) or lettuce in general (Hi, Rodger) and everyone devoured it.

Photo Copyright Once Upon a Chef