I’m sorry to report that I have no fan-related witticisms, so let’s dive right in. Here’s what the fan looked like before:

Gold scrollwork on the blades. Floral, fluted shades.  Let’s look at those with the camera flash on and the corners rounded:

Downright seedy. Who knew blue roses could look so prurient?

I started by removing the light bulbs and shades, and then the fan blades.

Next up was removing the light kit, which was super easy – just two wires to unscrew – and I then took off the motor cover.

Which left me with this:

At this stage, I no longer felt fully confident that anything I took down could be easily put back up. Some of the things in this apartment feel tenuously held together; this fan is one of those things, and I didn’t want to push my luck. (Not to say it’s an unsafe fan, but rather I wouldn’t be surprised if I removed a screw and the roof slid off the building.) So, I decided to paint the remaining fixture in place. I had seen several other posts in which people spray painted fans in place and I thought it seemed like a bad idea… and, guess what, it is! I prepped the kitchen carefully, covering the surfaces below with old sheets, and then used painters tape and trashbags to create a canopy, which I moved around as needed to help contain the drift of paint.

Looks kind of like a dementor, right? It worked, but I wouldn’t recommend this approach. Spray painting indoors = bad idea.

The back of the fan blades were filthy: so coated in grease and dirt that they appeared to be a different color than the front.

After scouring them in our bathtub, I let them dry over night and quickly sanded them with fine grade sandpaper. I taped up the electrical bits I didn’t want painted, stuck the screws in a box lid to secure them, and then went at the whole lot with white spray paint. 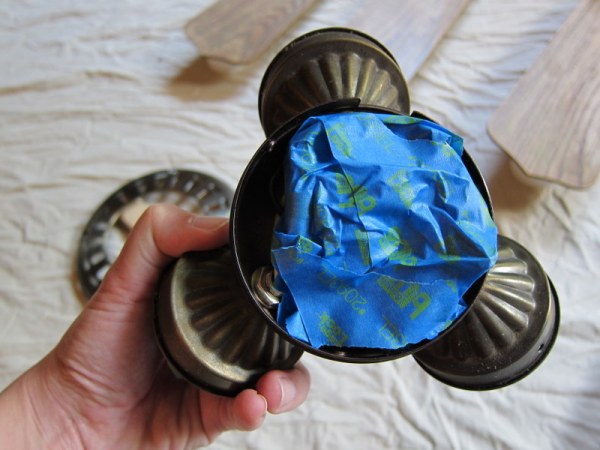 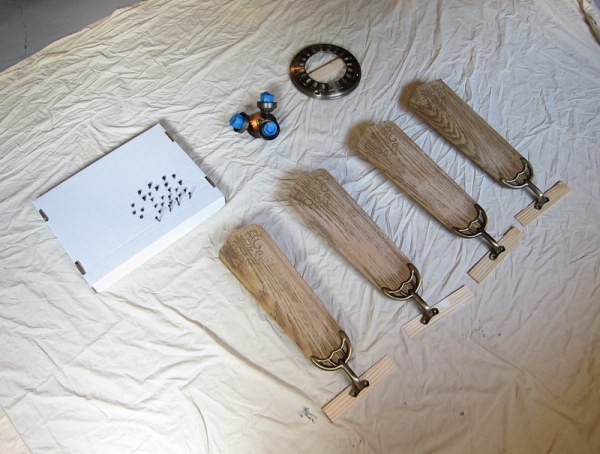 By the way, I didn’t use primer because I didn’t have any on hand and I didn’t want to venture out to the ‘burbs to buy some. You see, the sale of spray paint has been banned within the city of Chicago since 1995. It went all the way to the Supreme Court. It’s been a curse on Chicago DIYers ever since, and on this particular DIYer since 2003. I’m surprised it hasn’t led to drive-through spray paint joints along the Chicago city limit borders, like fireworks stands along state lines. Maybe this is an untapped franchise opportunity. DIBS!

Moving along: things went quickly once all of the tedious-but-necessary prep work was finished. 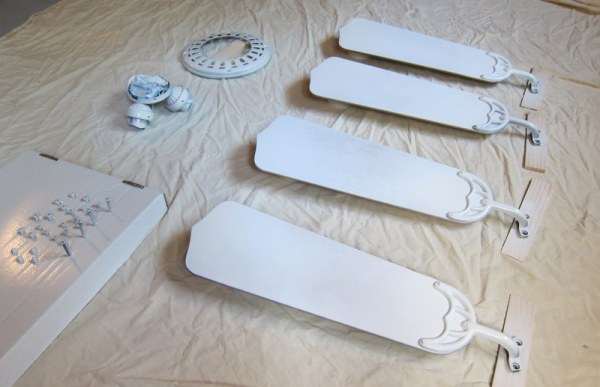 Several coats of spray paint later, I put everything back together again along with some cheap new shades (purchased at The Home Depot for $4 each). Brace yourself for some rather anticlimatic After pictures: 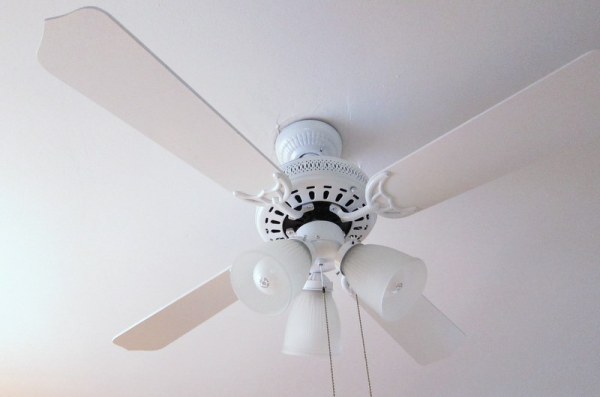 It’s a white fan! Hurrah! Really, though, I don’t want a decorative, bedazzled fan. I want a fan that blends in. Done and done. Now I’m eying the guest room fan. I’m also eying The Home Depot’s selection of ready-to-go no-defense-against-the-dark-arts-training-required fans. Did you know you can buy a ceiling fan for $24?! I sure didn’t.