Since the age of 19, I’ve been responsible for selecting eight living spaces (if you’re curious: that’s two in New York (short-term summer housing), one in Champaign and five in Chicago). Each time, upon move-in, I’ve suffered intense, stomach-dropping, soul-crushing regret. Even time, I’ve thought “I don’t remember it looking this shitty the first time I saw it.” Each time, I’ve thought “I’ve made a huge mistake” (the first and surely the only time this blog will link to CollegeHumor.com).

Everywhere I turn in a new place there are previously undiscovered flaws. This one’s got a lot. The landlords are batty. The baseboards are too high for our leaning bookcases. The oven’s pilot light is oddly loud and keeps our oven at 90 degrees at all times (that can’t be efficient, right? For the oven’s use of gas nor the air conditioner’s use of electricity?) Many of the electrical outlets aren’t grounded and many of the rooms don’t have light switches. The floors slope, making doors swing open or shut and never in the way you’d prefer. The walls are plaster. Everything is filthy. And tackling these problems only seems to turn up new problems – we taped off the ceilings to paint the bedroom walls, for example, and then when we pulled down the tape it removed huge patches of ceiling. Similarly, the new paint on the walls in the living room and dining room can be pulled off the wall in complete pieces, like peeling sunburned skin. And the worst part is that everything costs money and everything requires yet another trip to a big box store.

Anyway, at first I didn’t blog because we were just too busy trying to tame this beast, and then I didn’t blog because I knew anything I had to say would be really complainy. But now I’m on the other side of that, for the most part [she says after complaining for two paragraphs]. Stuff’s starting to come together. It is a good apartment – great backyard, nice neighbors, lots of room, high ceilings, big windows, tons of storage space (so much so that I’m worried about hoarding). All of the rooms are painted now except the kitchen, which should happen this weekend. I got two major pieces of furniture off Craigslist for a steal. Both bathrooms are finished: ours and the cats’. The vegetables in our shared garden are growing. (Cucumbers and tomatoes are probably fruit, technically. I think. Maybe? I can never keep that straight.) Pictures of all of this progress to come, along with pictures of everything left to tackle.

Really, check out that yard. What do I have to complain about? 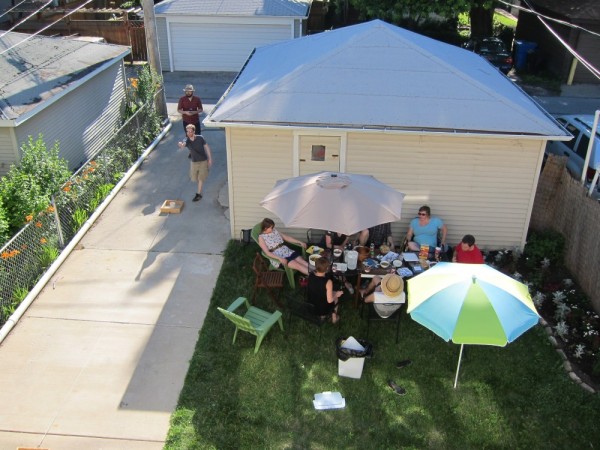 9 thoughts on “I’ve Made a Huge Mistake”